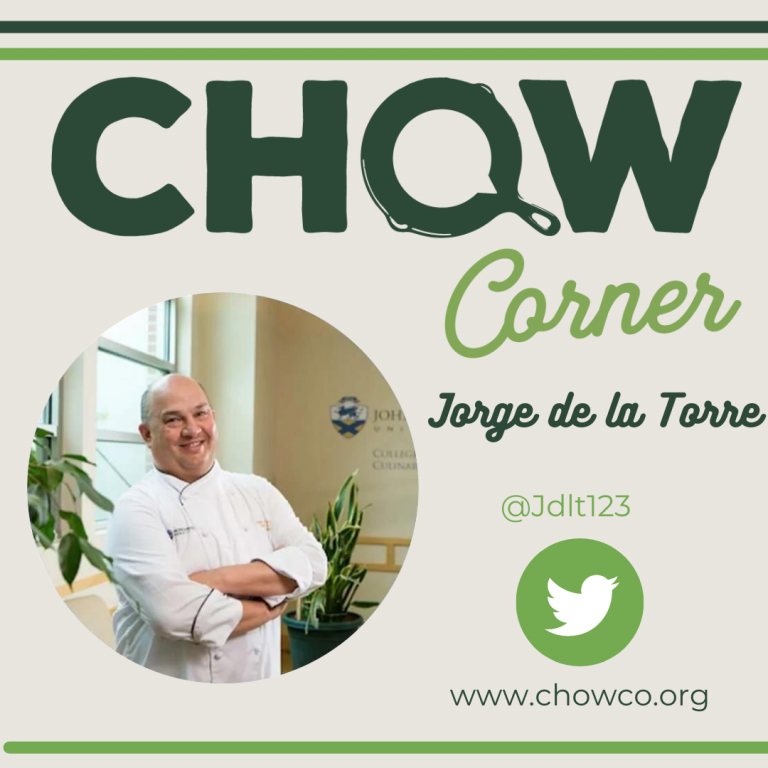 I’m Jorge de la Torre, and I have had the pleasure of being in many areas of culinary including fine dining, resorts, catering, owner, retail, and education and still enjoy it!

People often ask me if I watch the cooking reality show like HK, Top Chef, Kitchen Nightmares, etc. and I always say that I do not because they make me feel uncomfortable and they bring back the reasons that I knew that I had to leave the industry that I loves so much. The reason so many of those shows are popular is because of the stress and behavior that is shown makes for drama that still makes me wince. I always think to myself, why do people love watching the yelling, the high stress, the anguish that the contestants go through? Would the viewer like their jobs to be like that? Probably not and yet, so many think that this behavior is the norm and acceptable while in the kitchen.

I studied to be a chef because I was fortunate to come from a family that relished the dining experience, made education of different cultures important and was (eventually) supportive of my wish to be a chef.  I say eventually because my father came from a family that owned a hotel and restaurant and he knew that it was a physically and mentally relentless endeavor that was nonstop. He only wanted to shelter me from that life but after seeing my passion and happiness, became my biggest fan. Not that he was wrong, by the way! All holidays, weekends, nights, times when others where enjoying themselves, that is when I was working hardest. That also meant that my days and times off where in conjunction with the minority of the population and few of my friends that I had made over the years. You can see why chefs like Anthony Bourdain and Marco Pierre White describe their kitchens like bands of pirates, warriors, misfits, punks and rebels. They spent long hours together at work and then hung out at bars, clubs, late night diners and their apartments until the wee hours of the morning because the is just what you did. It sounded so cool to me and still sounds cool to many.

When I started at Johnson & Wales University in 2002, the students wanted to hear the war stories of kitchens past, they wanted to have a chef yell at them and throw a pan at them, they wanted to start their own nightmare stories. We obliged with the stories here and there, thinking back then that it was a badge of honor to work 21 nights straight during the busy season in a ski resort, showing scars from burns, cuts, back problems from standing, having shouting matches with chefs, yelling at the front of the house, messing with the waiters, etc. I thought it was acceptable because that is how my chefs were trained, ergo, that is how I need to manage and train you.  As I spent the years at JWU, I soon saw that the students were coming to learn for different reasons, different levels of the passion that I had and with a more balanced way of wanting to live their lives.

What did we call that change? Of course, just like every generation before us, we called them lazy, slackers, wimpy and too PC. The issue (fortunately) was that they were students and that we needed to find a way to reach them at their level. The university had (thankfully) an HR division that monitored faculty-student policies. We could not just fire a student because they didn’t do it like we demanded. This was a huge shift for many of my faculty that had come from industry and were apprentices that were trained in the old, abusive, my way or the highway method. It was us who had to take classes over the summer to learn about pedagogy, different styles of teaching, being able to shift and change to adapt to our audience. That was a major shift for our faculty. What do you mean that we have to adjust to them? It has always been the other way around! Once we became more accommodating, retention was better, grades got better, and the students were happier. Did that mean that we cut corners or diluted what was important about safety and sanitation? Did that mean that they were less skilled chef upon graduation? Absolutely not.

We as Chef/owners/managers need to understand that we are the ones in charge of the successful future of this great career. Just because we were taught a certain way and now we are successful means that that is the only way to mentor your crew. I would even argue that your success is in lieu of the way you might have been taught. This reminds me of methods that were accepted in the past and now are frowned upon. What would be your reaction if you saw a child being spanked in public? Many years ago, it might have been applauded as a proper education. Even the military whose creed was that you needed to obey at all costs sees the flaws in that philosophy.

Are you going to be the one who breaks the chain and realizes that all the people you work with are deserving of a safe, positive, well-paid career? Are you going to make sure that you are mentoring, taking interest in their life outside of work, checking in on them periodically? The immediate excuse is that you are too busy, to stressed out by the pandemic and labor situation we are in to take the time. How is that working for you? Why are some keeping staff and others not? Again, this by does not mean you’re allowing disrespect, bad kitchen practices or are being any less of a chef. You are becoming a better chef/owner/manager yourself by constantly evolving, learning, and engaging. Be the positive influence and yes chat about the old days but don’t make them seem like they were the “good old days”. They weren’t always.

I wish I could apologize to all those that I mistreated in the past thinking that was the only way for them to learn, it didn’t work. I wish I could take back my crude remarks to the waitstaff, they were never funny, not then, not now. I wish I had better resources to help the two faculty members that I lost to suicide because their alcohol and drug abuse went unchecked, their mental issues had nowhere to go and was thought of as a weakness. I wish that the time I saw a Kitchen Nightmare show with a chef that I worked with closely in NYC, a true gem of a guy, the ending wasn’t that he jumped off a bridge and killed himself because after a brief respite of success after the show, his finances got so bad that he thought that was the best answer for his family. In their honor, I will always make sure that the ones I work with feel safe, valued and cherished. I will also make sure that I take time for my family, my time, my health and wellness and know that this is the most important thing that I have. Without those, I cannot be the chef/manager needed to have a successful operation

Not once did I ever get a medal for working 21 days straight, 14 hours a day!

I can’t believe I thought that was cool.

Where did July go?